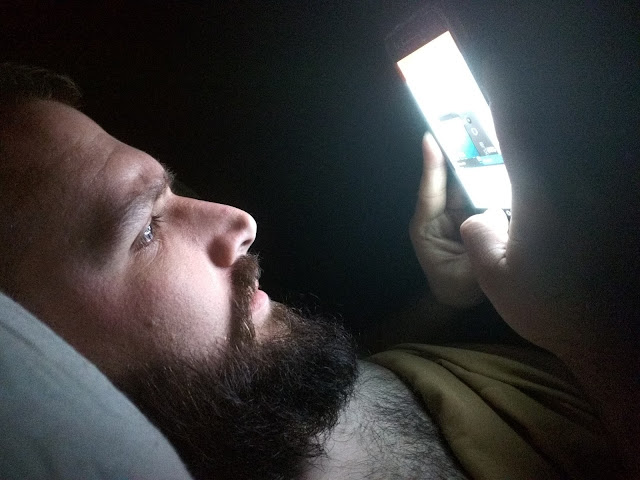 Your phone is robbing you of sleep!

Let's be honest. Most of us are guilty of doing the same thing that the lunkhead above is doing (that lunkhead is me by the way). Lying awake, redditing, maybe catching up on twitter real quick before you go to sleep for the night....

Next thing you know, it's 1:30 AM, and you are watching cat's being scared by cucumbers, and looking at cringepics. You were tired 4 hours ago when you decided to "look at twitter real quick", but now you are wide awake.

There is actually a scientific reason for this. Harsh lights (blue and white) actually inhibits the bodies ability to release melatonin and screws with its natural sleep rhythms.

The easiest solution is just not to use any electronics in the bedroom.

So, before I tell you a great way to get around that rule, check out this study I found by the National Sleep Foundation. Or, if you don't care, just skip down a little. See you after the break.


Communications technology use before sleep is pervasive.

"Artificial light exposure between dusk and the time we go to bed at night suppresses release of the sleep-promoting hormone melatonin, enhances alertness and shifts circadian rhythms to a later hour—making it more difficult to fall asleep," says Charles Czeisler, PhD, MD, Harvard Medical School and Brigham and Women's Hospital.  "This study reveals that light-emitting screens are in heavy use within the pivotal hour before sleep. Invasion of such alerting technologies into the bedroom may contribute to the high proportion of respondents who reported that they routinely get less sleep than they need."

"My research compares how technologies that are ‘passively received' such as TVs and music versus those with ‘interactive' properties like video games, cell phones and the Internet may affect the brain differently," says Michael Gradisar, PhD, Flinders University (Australia). "The hypothesis is that the latter devices are more alerting and disrupt the sleep-onset process. If you feel that these activities are alerting or causing you anxiety, try doing something more ‘passive' to help you wind down before bed."

Generation Z'ers (36%) and generation Y'ers (28%) are about twice as likely as generation X'ers (15%) and baby boomers (12%) to say they play a video game within the hour before bedtime at least a few times a week. More than one in ten (14%) of generation Z'ers say they do so every night or almost every night before going to sleep.

"Over the last 50 years, we've seen how television viewing has grown to be a near constant before bed, and now we are seeing new information technologies such as laptops, cell phones, video games and music devices rapidly gaining the same status," says Lauren Hale, PhD, Stony Brook University Medical Center. "The higher use of these potentially more sleep-disruptive technologies among younger generations may have serious consequences for physical health, cognitive development and other measures of wellbeing."

"Unfortunately cell phones and computers, which make our lives more productive and enjoyable, may also be abused to the point that they contribute to getting less sleep at night leaving millions of Americans functioning poorly the next day," says Russell Rosenberg, PhD, Vice Chairman of the National Sleep Foundation."

Oh, Hi there! Welcome back to the blog. Pretty interesting stuff if you like statistics and stuff.

So, instead of cutting out electronics, a great dev team over at "Urbandroid" developed a nifty app called Twilight (click to download) that works by slowly adding a soft red filter over your screen starting at a time you designate. The app effectively filters out the blues over time to reduce your exposure to the type of light that inhibits your secretion of that oh so sweet melatonin.

The app will automatically set itself based on the sunset and sunrise times of the location you live, but you can tweak things like the time it starts and ends, and the intensity of the effect.

I did find that it takes some getting use to, but once you have it, you will notice a difference, instead of staying up late enough to get to the weird side of youtube, You might just find yourself nodding off during that cute gif of the puppies.

So, does Twilight get the beard of approval? 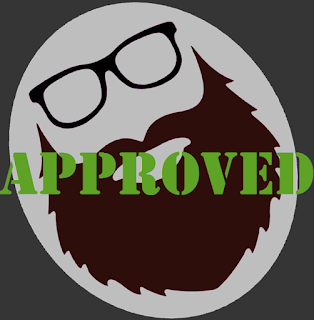 This app is Beard approved! Download it now. Be less grumpy tomorrow.